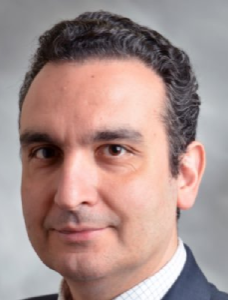 Cerebrovascular, Endovascular & General Neurosurgeon
Dr. Asterios Tsimpas specializes in the neurosurgical treatment of brain, spine and peripheral nerve disorders, as well as neurovascular diseases, including ischemic and hemorrhagic stroke, aneurysms, arteriovenous malformations and carotid disease. He serves as the Co-Director of Cerebrovascular & Endovascular Neurosurgery and the Surgical Director of the Comprehensive Stroke Center at Mission Hospital – Mission Viejo.
He received his medical degree (MD) from Justus-Liebig University of Giessen, one of the oldest and most prestigious universities in Germany, and obtained his Master of Science degree (MSc) in International Health Policy at the esteemed London School of Economics and Political Science in the UK. He completed his surgical internship at Brigham and Women’s Hospital – Harvard Medical School, and trained as a general surgery resident at the Hospital of University of Pennsylvania, before completing his neurosurgical residency at University of Miami – Jackson Memorial Hospital. After graduation from residency, he trained as a fellow in Neurovascular Surgery and Endovascular Neurosurgery at Jefferson Hospital for Neuroscience. He earned his MBA from Kellogg School of Management – Northwestern University, one of the top business schools in the country.
Dr. Tsimpas is a Diplomate of the American Board of Neurological Surgery, a Fellow of the American College of Surgeons (FACS), a Fellow of the American Association of Neurological Surgeons (FAANS) and a Fellow of the European Board of Neurological Surgery (FEBNS). He has authored more than twenty peer-reviewed publications and several book chapters, and is an internationally acclaimed researcher and presenter. In addition to English, he is fluent in Greek and German, and understands basic Portuguese and Spanish.